Most people choose our signature Farewell Spit Tour which, as well as exploring the spit, stops in Puponga and at the most northern point on the South island, Cape Farewell. From the cliff tops, seals and their pups can be seen all year basking on the rocks below. Read more

Cape Farewell is the northernmost point of the South Island and the cliff-top views are spectacular. These dramatic coastal cliffs are sliced through with fault-lines (vertically walled slashes) where streams strangely run inland rather than to sea.

The next stop is Fossil Point, at the base of the Spit, a popular hauling out place for NZ fur seals. Fossilised shells and wormcasts emerge from blocks of mudstone at the base of the cliffs and sea life abounds in rock pools nearby.

Thirty kms along the ocean beach we stop at the Lighthouse reserve, where we pause for 45 minutes to check out the lighthouse and pouwhenua, and discover the connection between the local Iwi and Onetahua (Farewell Spit). There we also enjoy refreshments in our lighthouse keepers' cottage and soak up some local history.

Returning from the lighthouse, we climb a sand dune at Mullet Channel for panoramic views of the ocean beach. It's a spectacular sight, gazing over the dunes along the centre of the spit and out to the inter-tidal plain where the migrant waders from the arctic circle feed during our NZ spring, summer and autumn. The wind-blown sand creates beautiful designs along the dunes, their colours changing as the sun rises or sets, depending on the time of day.

Our guides are passionate about the history, ecology and wildlife of the Spit and are committed to ensuring you get the most from your trip. Hear the history of Puponga and New Zealand's first Radar Station. See where Whales strand and uncover the mystery of the migrant waders.

During the summer there are up to 20,000 godwits and 30,000 knots at the Spit, as well as other northern migratory birds, New Zealand natives and introduced species. Bring cameras and binoculars to make the most of this nature-lover's paradise.

At the Farewell Spit Lighthouse there is time to explore around the historic buildings and enjoy the refreshments provided in the century old lighthouse keeper's residence. Along the beach you'll see stunning views of the Tasman Sea coastline and the opportunity to climb the sand dune at Mullet Channel for panoramic views of the intertidal plain and a stop at Fossil Point, .

(Refreshments are provided and meals can be arranged.) 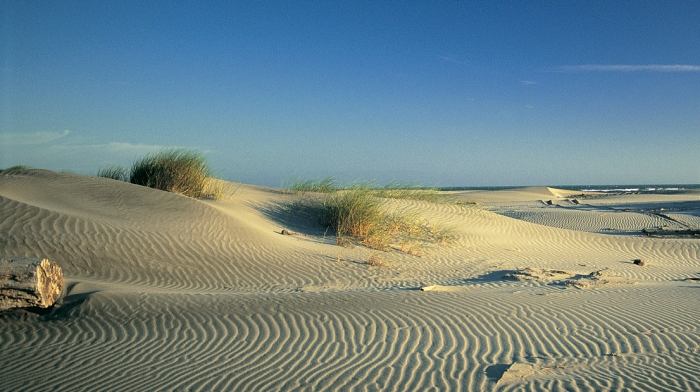 A highlight of the trip along the spit beach is the opportunity to stop and climb one of the low sand dunes that run down the spine of the spit. From the top of the dunes a 360 degree view unfolds. Discover more... 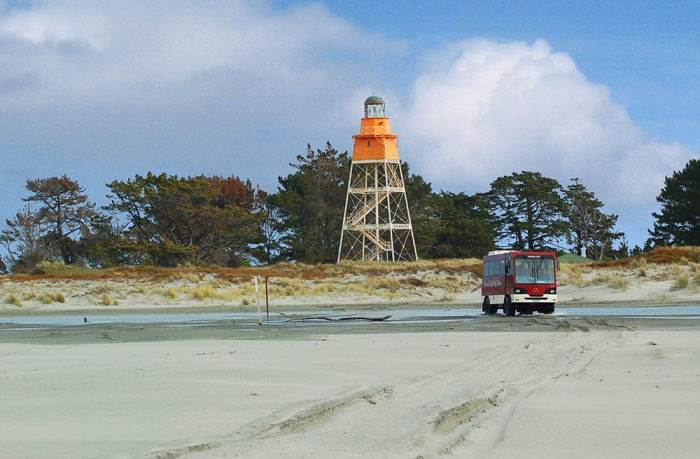 The historic lighthouse is located about 27 kms along the beach, almost at the seaward end of Farewell Spit. Discover more... 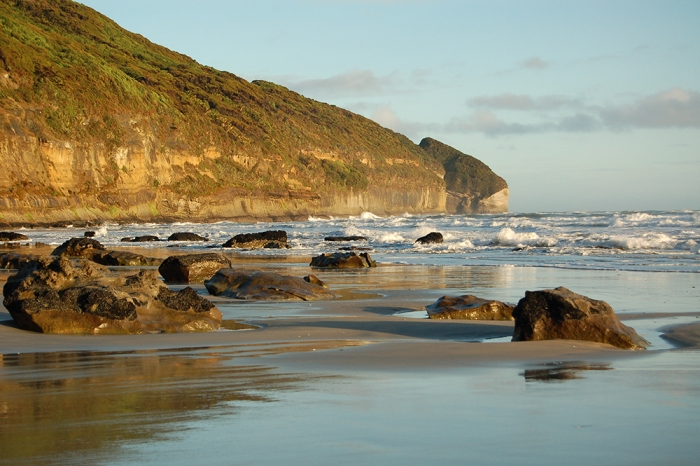 Fossil Point is a beautiful meeting place of ocean and land. Look closely here and you'll see small fossilised shells and worms outlined in the rock at the base of the cliffs. Discover more... 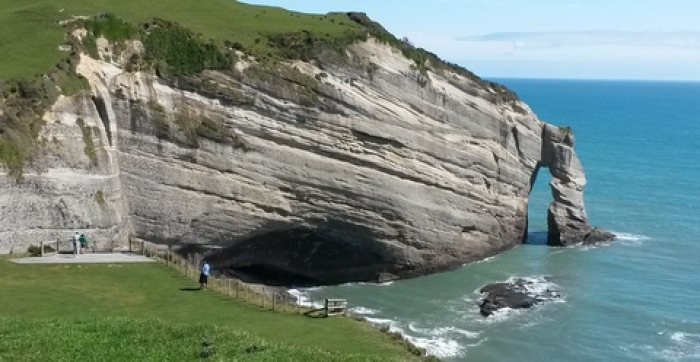 Cape Farewell is the northern-most point of the South Island. Peep over the edge of the dramatically sculpted quartz sandstone cliffs and you may see lazy New Zealand Fur Seals soaking up the sun on a rocky ledge far below. Discover more...